My daughter was lurking in hallway, watching us through the crack between the sill and the door, commenting that the book was boring and waiting for me to come read to her because her dad was out and the kids go to bed at roughly the same time. At that moment, I made the key mistake of saying she could either join us or do something else while she waited but not criticize the vehicle book and ALSO I resurrected my argument that we should all read together one narrative that everybody likes, maybe a series.

One prohibition and three ideas are too many for any situation in which the end goal for me is for everybody to be asleep in 15 minutes and the end goal for each child is mysterious and abstruse but seems to involve securing additional post-dessert food items, falling off the bed very slowly and on purpose in a showy way, like a slow loris that dimly recalls starring as a precocious child-star loris in whatever the godforsaken equivalent of the Disney Channel is for Southeast Asian primates, and ensuring that the other child gets ignored.

“Like what?! Like what book?!” my daughter yelled as I noticed that I had worn two different socks, neither of which made the transition between my pantleg and boot-top at all pleasing, while also thinking of a work thing I had to take care of at the same moment I had a delayed aural memory that led me to confirm to myself that yes, it was Belinda Carlisle of the Go-Go’s who was singing a song about going down, down, down in a submarine on the episode of Curious George that we had all watched earlier in the evening.

William H. Macy, as it turns out, is the voice of the Man in the Yellow Hat on Curious George, and Joan Cusack does voiceover work on Peep and the Big Wide World. Joan Cusack also played an agoraphobic… I will go ahead and say rapist of William H. Macy’s character on the show Shameless (she handcuffs him to a bed which seems consensual but then goes after him with a huge sex toy and truly he has no choice there). And so now alongside the small round birds of Peep world and the tail-free monkey and the gentle hijinks and country-house/lavish-urban-apartment lifestyle of Curious George, there are the specters of an agoraphobic shackling dom and a substance abusing grifter sitting on a hemorrhoid pillow also in my consciousness as we all sit in the living room. I understand that voiceover work is probably easy-ish and lucrative for actors, but sometimes I wish they would show less range and stick to one genre because some of us who have young children are both very tired and 100% tenderized by 7 p.m. and cannot handle the dissonance.

But not really, I can handle the dissonance, though what I do find a neutralizing resort is the line “the men that is now is only all palaver and what they can get out of you,” because its many small words are fun to say; I wish someone’s job were just to stand in the aisle of Congress and shout it over and over; and because when I subject myself to Shameless and Macy’s character starts speechifying I can repeat it to myself, like a Joycean white noise machine.

My children are the opposite of a white noise machine. They are the noise of every color. They are like the mug my son painted the inside and outside of, which we now cannot drink out of and he described as “so rainbow.” The kids were so riled up about books and how they could never read the same one, and they were both draped over me and have knobby everything as well as a lot of fast-twitch muscle fibers, so I shouted, very helpfully, that we should all start reading “Harry Poblet and the Gutter Fire.”

The first book in the Harry Potter series is “Harry Potter and the Sorcerer’s Stone.” Another one has a goblet in the title. I think there is fire in that cup. I don’t know. I could look it up; I don’t want to.

That scenario, in its basic outlines, is what happens to me when I try to cook food when other people are around. I cannot do any single thing, so I do several things badly, reverse course at least once, introduce too many things, and then give up just at the moment referring to widely available resources would help bring some clarity to the whole situation.

which I believe began as an experiment with roasting tropical fruit. Following my instincts as well as the advice of every entity in the world that talks to my demographic and says to try to do fewer things more thoughtfully, I decided to decrease the number of meals I prepared, which led to this:

Just a soupy container of chickpeas that I ate for lunch one day, and this: 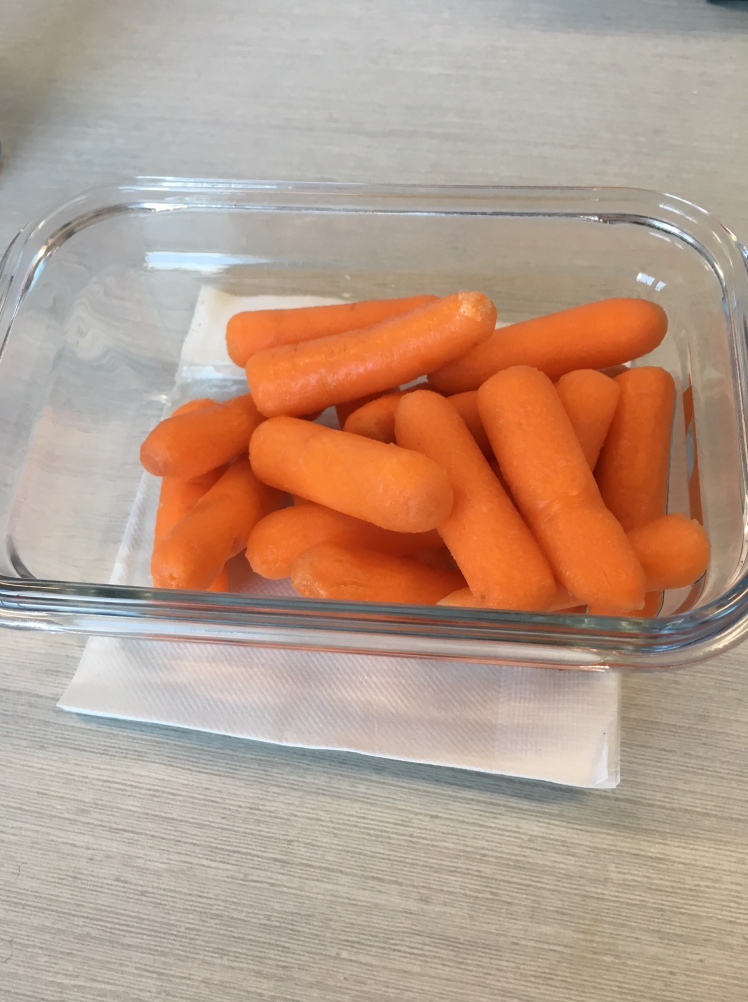 which I also decided equals lunch. Look at the dismal cracks at the ends of those carrots. And that, you know, was probably one and a half giant carrots doused with Dow’s nerve agent pesticide that were then just shaved down and put in a bag so they could get increasingly damp, and so the moisture could collect in the corners of the plastic bag in case you wanted to milk it later rather than go to a juice bar. When I ate them, I felt like this gal:

Or maybe guy. Anyway, s/he and I share the same hairdresser, because the same day I ate the baby carrots, I used this to do my hair:

I thought it was a My Little Pony Brush, but if so, why does it have a bear with a third eye for a handle? Sometimes I say to myself, “Treat Yo Self!” and order out, and then I delight in this sort of extravagance: 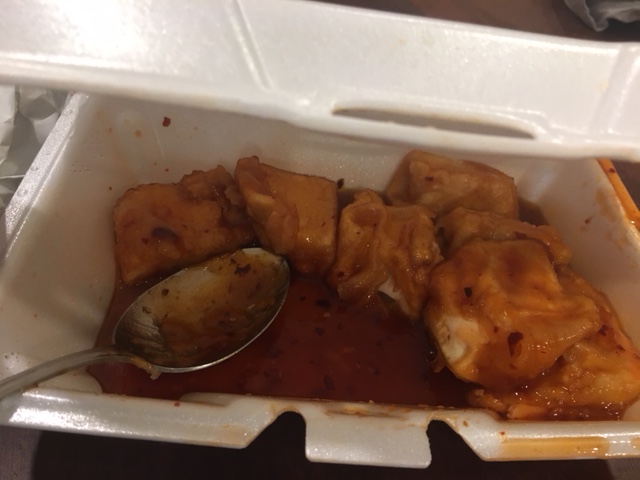 an orange tofu heap, best eaten with a spoon. But other times I get my shit together and find something like this:

Does that yogurt parfait look precarious to you? Well it was. I knocked it off the shelf after swiping myself in. That day I had dried yogurt all over my lower extremities. Do you wonder what I look like at work? Probably you absolutely do not, but it’s kind of like this:

Except age that poor child a lot and give her a post-towhead hair color that people call things like “dirty old towel” or “swept ashes.” I haven’t given up, though. I read this:

and chose to follow none of the advice from “16 stylish, accomplished women” because they included things like eyebrow embroidery (I feel like eyebrow latch-hooking might be my jam), avoiding nail polish, which I already do, and waking up your eyes with eyeliner. A) I like to wake up my eyes by looking at the clock and panicking that it’s 15 minutes before I need to leave to get to work on time, and there are 700 things to do calmly, if possible, in those minutes, and B) my makeup application style has not changed since 12th grade. I quickly misapply eyeliner and stuff, hoping that moving speedily means that the angels of cosmetics will guide my hand, and then very meticulously wipe it all off, but still not get it all off, so it looks like I am standing in such a way that the shadows of fishing lines strung at odd angles have fallen on my face.

Plus, I am full of the wisdom of the ages, handed down lovingly from one woman to another without schadenfreude or the valorization of suffering, totally unlike the elders who insist on continuing the process of FGM. We all have to eat, and… a… it will… one thing that is easy to wear but chic…  but… you can… you should moisturize!

Here is one way to do that. You wear it for 30 minutes, and it is not frightening at all to your family or friends. You can wear it at home, or to the beach, or while jogging, or on a late-night professional Skype call overseas. You can have a fun girls’ night out in this. And then when you peel the paper off your face, it’s like snails have just deplaned. From your face!

One thought on “Total Clarity and Unstinting Glamor”