In times of uncertainty or likely impending crisis, I often decide to cook. This makes little sense, because usually the crisis is my cooking, so cooking in a crisis is just creating a set of interpenetrating disasters.

A little while ago, I was facing down a four-day period of solo parenting, the school-work-transportation-afterschool-food logistics of which could best be represented by a football coach writing all over a whiteboard and then needing more space and flipping the board over by punching it and then scribbling more wiggly lines while his blood pressure spiked. 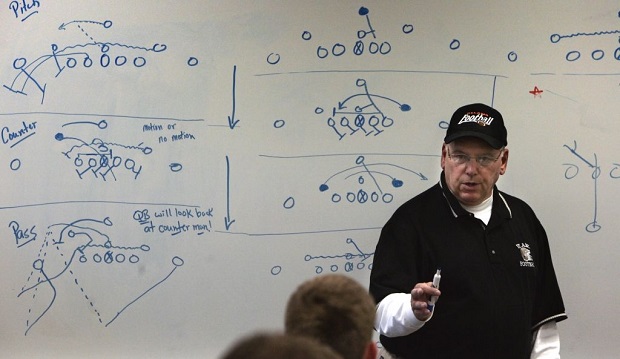 I am super-happy to know that there is such a thing as “the shovel option” (below). I believe it is multi-purpose and is good if you’re winning or losing. As you can see clearly, it starts with a northwestern F and redounds to an oval next to the squiggly right-side line of total victory or sportsmanlike game-losing. What does that guy think of it? Who knows! He thinks of it, though.

Anyway, not to make it seem like a big deal though clearly I’m making it seem like a big deal, on the Sunday afternoon that commenced my solo-parenting period, I decided that it was time to cook several meals, including meatballs, chicken noodle soup and a pasta thing, and to invite my kids to make chocolate chip cookies with me while all these things were in process.

Do you want to know what cooking web sites say about cooking with children? They say things like this:

“Cooking with kids is a rewarding way to bond with kids and teach important life skills.”

“Tossing a salad using leftover chopped meats and assorted veggies and nuts is fun for kids.”

“Have them coat it with spray.”

“Jazz up your poultry routine.”

“Teach them to cook and you’ll worry less as they grow up.”

That last one is pure bullshit, like “buy this car and you’ll be taller and less mushy in the middle.” Also, I don’t want jazzy chicken, or kids tossing bits of meat into my salad. But I do like baking with kids, because usually all the prep uses good-smelling stuff, no one needs to manage a flame, and most kids are not tempted to dip their hands into a stand mixer.

While we were baking, the kitchen smelled very… meaty. I had made meatballs following a recipe that instructed me to brown them and then cover them with sauce and bake them for 90 minutes at a 425. That seemed excessive even to me, someone who confronts rare meat in just the way I would react to seeing the saliva-slick gums of a Kraken, spattered with chunks of freshly killed octopus and the gore of fishermen who had ventured too far into a Nordic cautionary tale. But I was the only adult in the house at the time, and thus I had decided to follow directions.

As the kids packed brown sugar into measuring cups, I tried to take a gander at the meatballs, 45 minutes in, but the backdraft of the oven essentially blinded me so I decided to just trust the internet.

We had to wait to bake the cookies until the meatballs were done and I could lower the oven temperature, so I invited the kids to help me finish making the soup. The younger one got a butter knife and the older one got a steak knife, and they proceeded to cut carrots and celery into shapes that looked somewhat like tangrams, in a size considred bite-sized only if you are a shark.

It is not wise to ask kids to make cookies and then wait to bake them. They started going haywire and arguing about the placement of the stools they were standing on in relation to me and to the counter. I intervened by taking the meatballs out “early” and then letting them add noodles to the soup before the soup was ready for noodles while the oven cooled. The younger one dumped in a box of ziti that was intended for another purpose. The older one meticulously broke spaghetti into two-inch sticks and placed them in the pot with great care.

Once the cookies went in to bake, the kids left to watch tv and I uncovered the meatballs. After a mushroom cloud steam-cleaned my face, I saw that the tomato sauce had the rather crisp top layer of snow that has softened in the sun and then refrozen overnight. It was also pockmarked with holes, as if the sauce had been desperate to breathe. Or was a lava field. There was a black bubbly rim around the pan. The meatballs can best be described as wizened. Like, “Hey friend, I know your career in nonprofit literary publishing career never paid much, but the Baby Boomer you have settled in with now for stability could lay his scrotum on a museum table and it would pass for a couple of shrunken heads.” Such were the meatballs.

I was dismayed, but saved one pan of cookies, then another. The soup was simmering. A friend came over and the kids played around in the snow. I forgot about all the food, but did make sure the oven and all burners were off.

At dinnertime, I announced that we were having the soup we’d made together. When I took the lid off the pot, soup was not to be seen. What was to be seen was a mass of pasta that had expanded, palely and completely, to the perimeter of the pot. It looked a bit like brains and a bit like a bouncy house floor, industrially stitched in a tubular pattern, that had been drained of color. There was no broth left. Shards of celery stuck out here and there, trailing strings that the butter knife had not been able to sever.

I announced that dinner would be later, and then heated several frozen things. I turned back to my computer, chock-full of cookies and the ghost-programs of scheming oligarchs, but had a hazy research agenda. If you have poorly defined questions, things will come to you, parading as answers. But they are not answers. Por ejemplo:

I found descriptors: the humble meatball, the versatile meatball, the international meatball, the famous Italian meatball. And these were not profiles on Grindr but just ways to think about meatballs. But not answers to what to do with shriveled, withered meatballs. Nor did they inform a path forward for the soup that had turned into an edible pillow. But I did learn one thing. You know when someone makes a falafel to order and that person moves down a row of toppings housed in metal tins behind a sneeze guard?

That thing is called a “one-pan refrigerated drop-in cold food well with or without condenser.” The small metal boxlike containers are called “hotel pans.” When I get a falafel, I kind of cannot handle answering all 19 questions about what I want, so I just take it all. “You want everything?” “Yes,” I say. “Onions? Hot sauce?” “Everything!” I say. The runny sauce, the thicker sauce, the spinach, the lettuce, the hot peppers, the despair of my ancestors, the tomatoes, the broken zippers, the canaries, the coal mine, the data harvesting, the lies, the glorious now, the aftertaste, the dullness of my second prom, the paperwork. Give it to me! I am not discerning.

But my children do not share this maximalism. So for dinner that Sunday they got plates with fish fingers, tater tots, raw carrots and apples in discrete piles. I ate mushy pasta-soup with a side of meatball briquettes. I ate that for lunch for a week, even on the snow day that fell in my solo-parenting time, and even on the day there was a two-hour delay to start school and work and there was theoretically time to make something, anything else because I will not make anyone else eat it, but I will! It is a time-tested approach, and I call it the Shovel Method and it is a tremendous success-failure and you should try it! All of it!