Of the many surprisingly wonderful things that there are, one is a dough blender, one is a cherry pitter, and one is this group of tuba and euphonium players performing “Down in the River to Pray.”

I thought tubas were mostly for deflating white supremacists or expressing defeat. But they are not! They are, apparently, the big-belled voices of angels, when the angels are not like, “Imma come down there when CO2 levels get a touch higher and SLAP YOUR FACE while the RISING SEA EATS YOUR HOUSE even as you are suffering from a tick-borne disease in the middle of a DROUGHT!” I do not think of angels as hanging around hippie gift shops or as fond of leaving strips of paper that have words like “affection” or “courage” in bowls. Those bitches are ancient and will come shred you.

Doesn’t it seem like it would be nice to wake up to tuba music?  If there were a soundtrack to my mornings, it would not involve music, or even the prelude to music, because a dissonant orchestra warm-up would be too forward-looking. A bunch of brass instrument players clearing their spit valves would be too problem-solve-y. Maybe someone angrily yelling, “Where is DENNIS? He said he’d be here to unlock the practice room but I bet HE’S PASSED-OUT DRUNK AGAIN,” would be correct.

When I awake, I possess the raw sensuality and hunting prowess of a panda born in captivity. I am like the single raw ear of corn that someone brings to the potluck and tucks next to the chips.

Earlier this year, I tripped over the corner of my bed one morning while getting ready for work. That is hard to do, because I know where my bed is, because I sleep in it. I was already dressed and had on tights, and my shin hurt quite a lot, and continued to do so for nine hours. The whole time it hurt I was like “Gahd, I’m old and so weak. Why am I so easily injured?”

But that evening, when I finally removed the tights, I saw that my entire shin was black with dried blood, I had a huge bruise and a gash, and the skin that had been shucked off was stuck in a large, revolting shred to my tights, which were dark grey so the blood hadn’t seeped through noticeably.

The conclusion that I drew from this is that maybe it is time to take a fresh look at things I assume to be true, such as that I am a wuss or that the things I eat for lunch are acceptable.

I have on many occasions eaten burritos like these for lunch. The packaging on these burritos instructs you to run them under water and cover them with a damp paper towel and then microwave them. 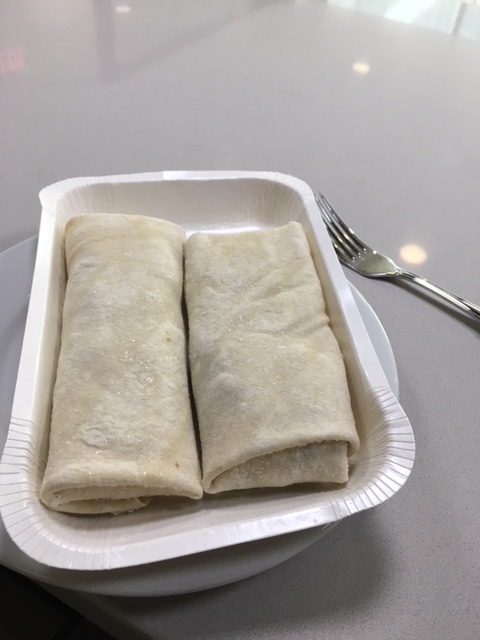 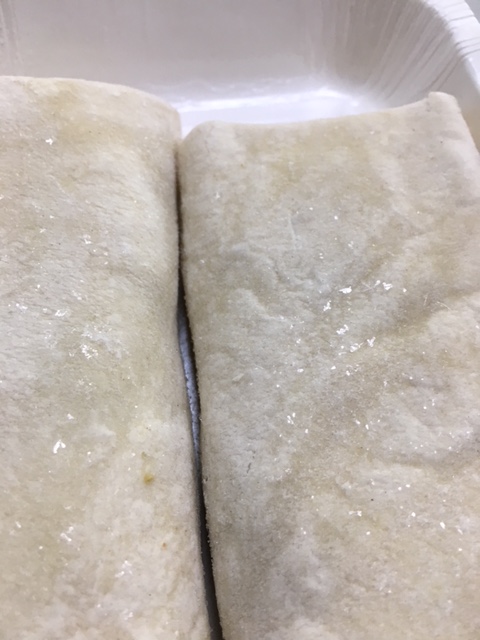 A yes, they glitter with diamond-like frost.

If you have to wash something off and then drape it in fabric before sticking it in an oven—if you must perform ritual funerary practices on your lunch – is that the right thing to eat? Also, if the burritos burst open, not at the seams but right down the center, and brown mushy beans issue forth, how… do you… enjoy that? Especially when just underneath the scalding bean eruption is an ice-cold patch of beans? And it’s all so damp? And it’s completely inert, unlike all the food in commercials for restaurant chains, where any meat has a huge grill all to itself and a bright flame and a sort of reverse rainfall of sizzling all around it? And anything sautéed is sautéed in mid-air? And salad doesn’t come on a plate but rains down like nutritional confetti? Those commercials indicate my food should not come in its own paper casket.

Also, if I go for something less pale, like this chili relleno, should lava accumulate like that in the corners? Why is some of the cheese still in shred form, and some pooling off to one side? Why does the container appear to have blood spatters? 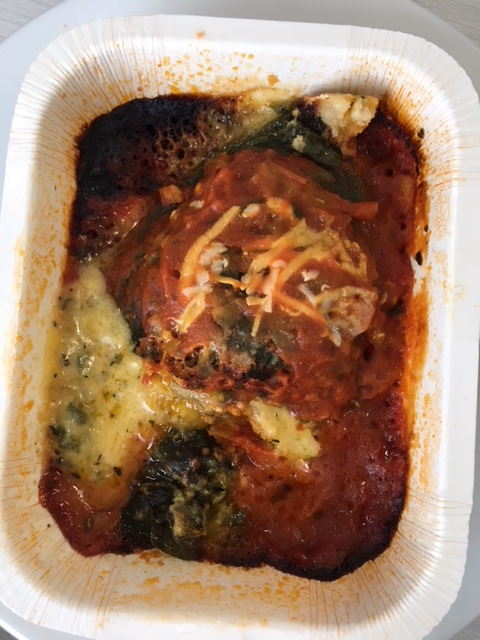 Another option is to go out and buy something recently prepared. 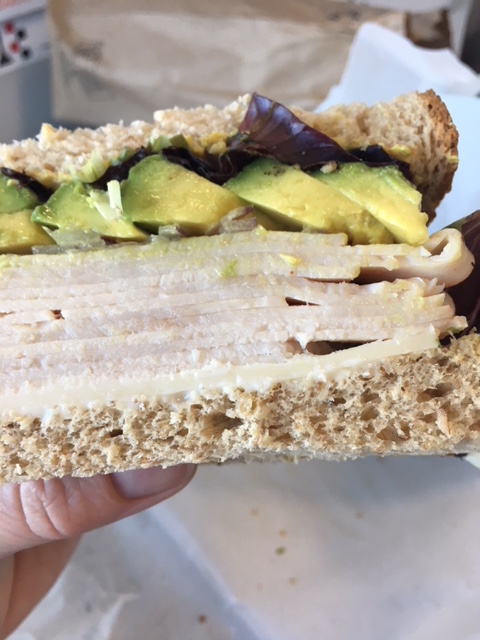 For the love of God, why does one entire inch of turkey seem like the right amount of turkey? Why must it be so compressed? What happens if air is allowed between the turkey slices? And then how do you eat this without the avocado first sliding and then shooting out the sides as soon as you get your jaws around it? Also, why isn’t there more cheese and less turkey? Who decided mayonnaise was the right thing in any situation?

You can forget sandwiches and go back to frozen foods that are less corpse-y or volcanic. Like this saag. But that is a lot of thick sauce, basically, and if you don’t introduce rice or naan, you’re really just slurping goop. I never remember rice or naan. And yet also the saag, though thick, manages to cascade from container to plate to desk to knee to floor. A glorious spinach waterfall under which you will probably not get married. 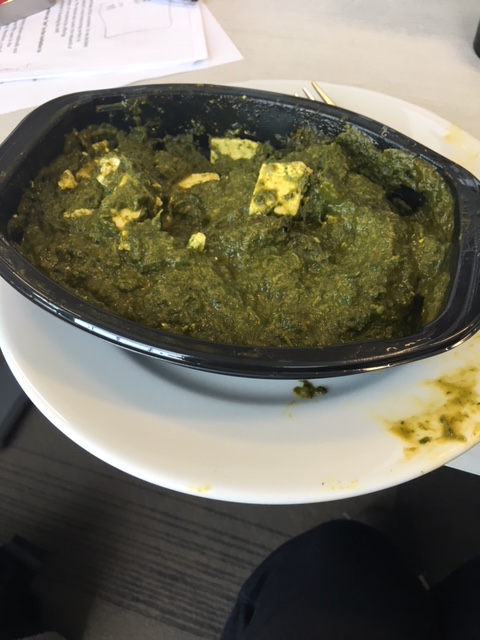 You can live off the fat of the land if you work in certain offices, I guess. This salad appeared upside down on the island of the shared kitchen. Like a hexed salad. Or a salad UFO. 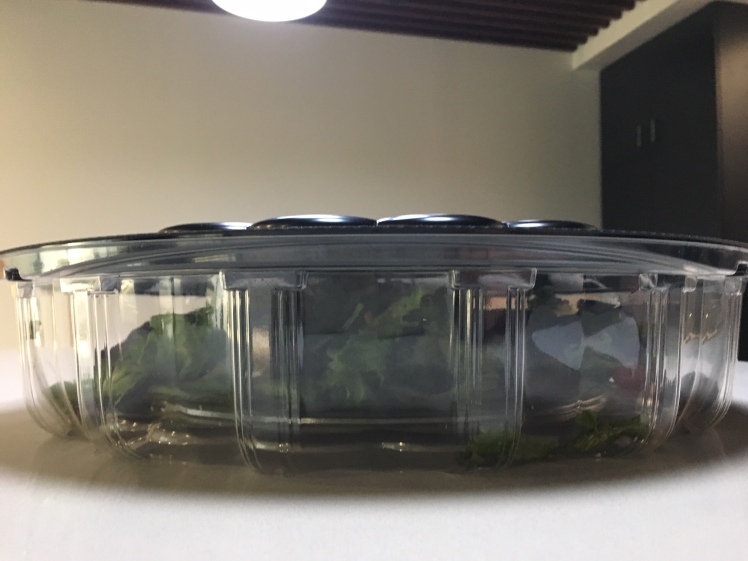 And these boxes of pizza had been so clawed-through. Like puppies had run over the pies. It was a massacre. 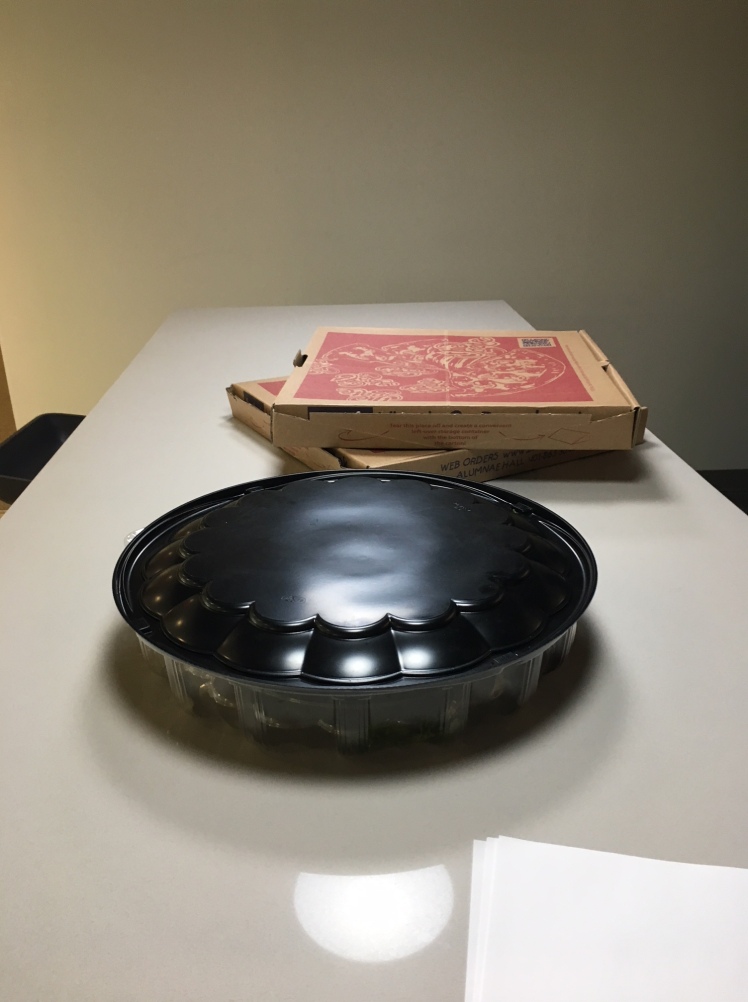 And no one could stand to be the one to eat the final inch of cake. “Let’s just leave this trash here,” someone said. “Someone will love it,” they lied. “If we leave the knife in there all sorts of possibilities will present themselves.” 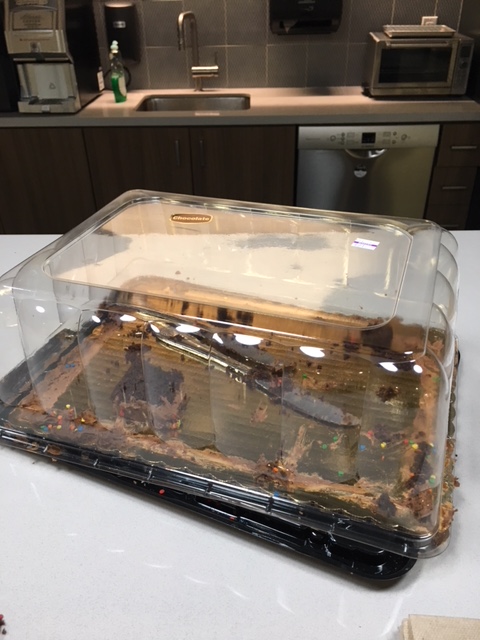 Some days, I just bring apples and grab something from the counter of my kitchen. But some days that thing I shove into my bag is not at all lunchy, like this bag of chocolate-covered pretzels. One thing I do not have to reevaluate: this is not how one should open a bag of anything. But that is how everything in my home gets opened, if I don’t open it. Boxes of salt, coffee, cereal, sometimes juice cartons. I live with bears. I am the only panda-like bear. If you don’t believe me, here are many views of how my bear family opens pretzels. 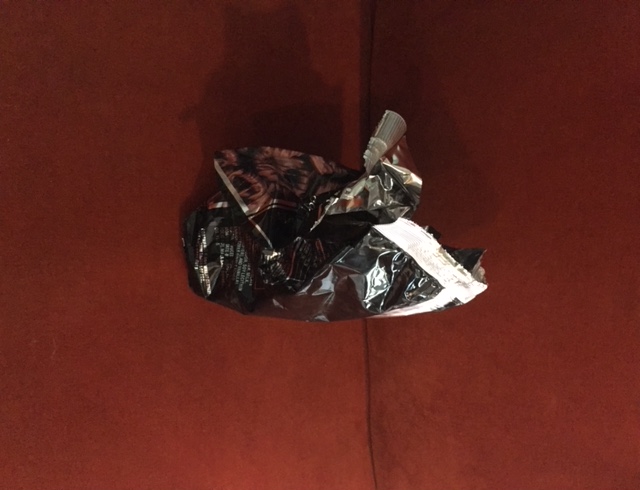 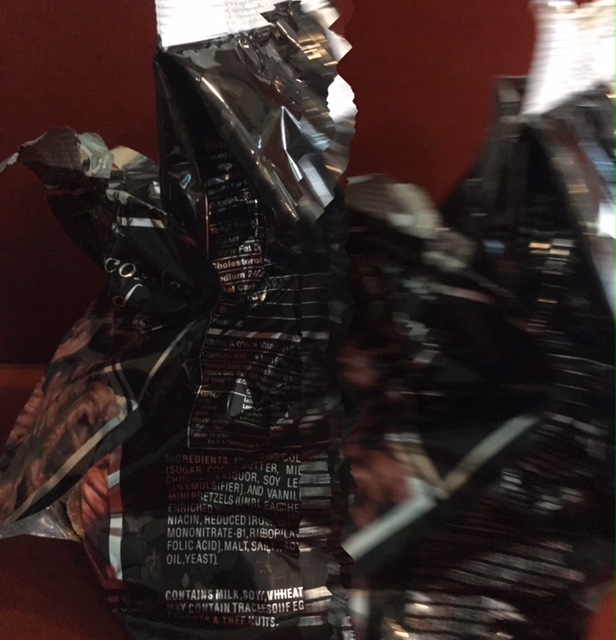 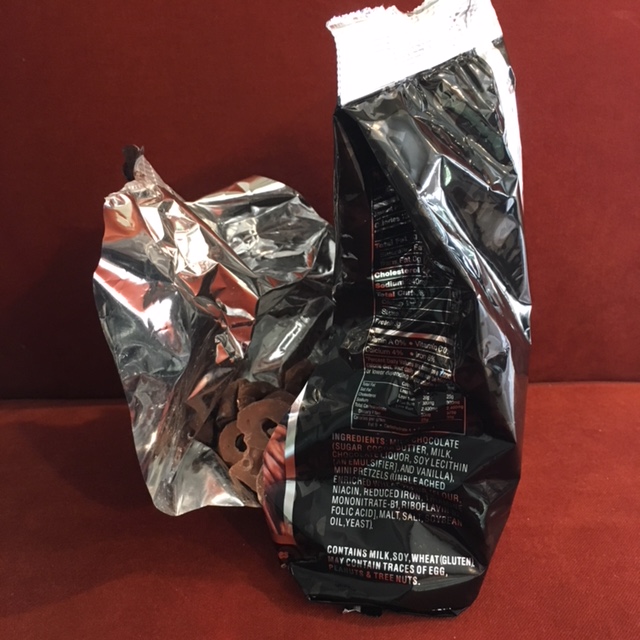 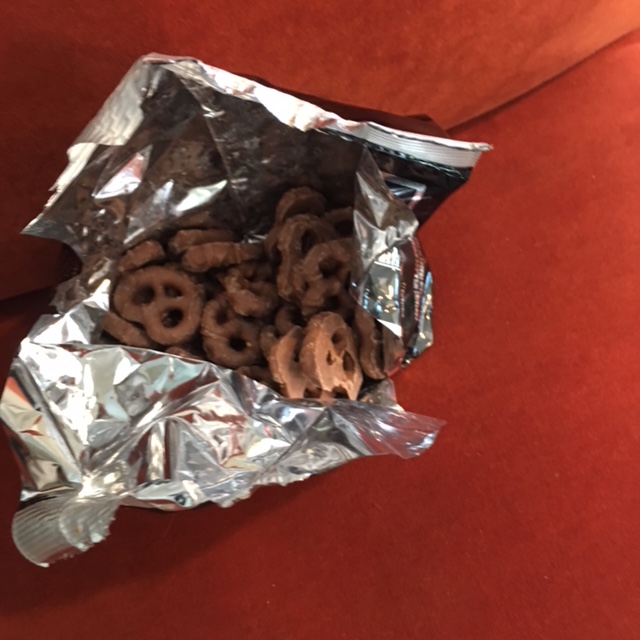 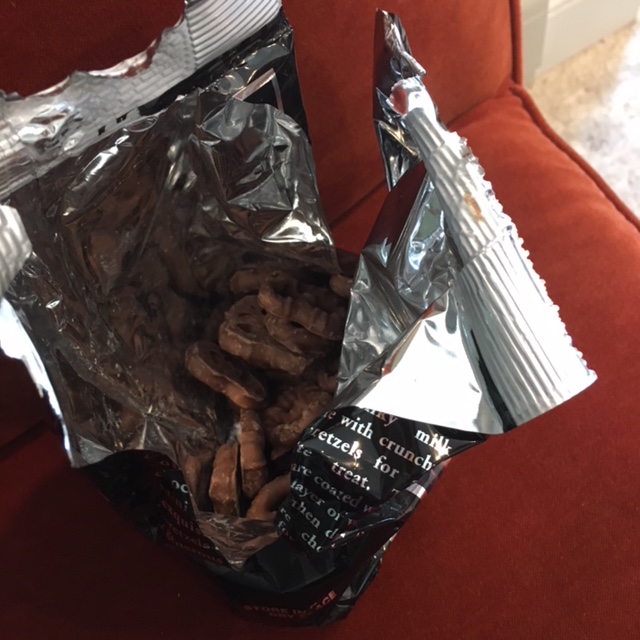 That should be all the evidence you need.